One of my ongoing research projects concerns the provenance, history, structure, and present-day saliency or just mere survival (if any) of clans and other traditional kinship groups among Chechens, Albanians and other often stereotyped ‘archaic’ peoples and communities; this research project already has brought its first distinct publications (book reviews, research notes and essays, etc.) as shown in page ‘Publications’. 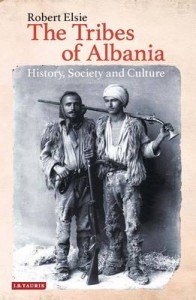 Thus in some publications of mine, I use and refer to an extensive table that shows half a dozen major characteristics of 74 discrete and 3 composite Albanian tribes in Robert Elsie’s Tribes of Albania (I.B. Tauris, 2015): see for the original table robertelsietribesalbaniafeatureslist2018.

The explanation of the table’s categories and columns can be found in C. ten Dam, ‘What (Little) We Know about Albanian Tribes: Reflections and Tabulations’  Forum of EthnoGeoPolitics Vol.6 No.3, Winter 2018, pp.23-65.

This extensive table – and a simplified table shown in some of my publications – is constructed by me, not by Robert Elsie, though it closely follows Elsie’s sections and headings on:

The characteristics of the better-known and documented tribes are described under all or most of these sections and headings in Elsie’s book, the lesser-known and documented ones only under some of these. Yet the table includes some more separate categories I have distinguished myself, on e.g. saliency of blood-feuds and miscellaneous facts, and some more intricate or nuanced information within the cells of the columns.

This website uses cookies to improve your experience while you navigate through the website. Out of these, the cookies that are categorized as necessary are stored on your browser as they are essential for the working of basic functionalities of the website. We also use third-party cookies that help us analyze and understand how you use this website. These cookies will be stored in your browser only with your consent. You also have the option to opt-out of these cookies. But opting out of some of these cookies may affect your browsing experience.
Necessary Always Enabled

Any cookies that may not be particularly necessary for the website to function and is used specifically to collect user personal data via analytics, ads, other embedded contents are termed as non-necessary cookies. It is mandatory to procure user consent prior to running these cookies on your website.